Darwinia taxifolia is an erect or prostrate shrub from 0.3 to 1 metre high. The leaves are greyish green, about 5-15 mm long by 1-2 mm wide, curving upwards slightly and tapering to a point. The small flowers occur in clusters of 2 to 4 and are red in colour. The flowers usually occur in spring to early summer. Two subspecies are recognised: subsp. taxifolia and subsp.macrolaena, the most obvious difference being the relatively large flowers of the latter. Subsp.macrolaena also has a wider natural range than subsp.taxifolia.

D.taxifolia subsp.macrolaena is well known in cultivation and has proven to be hardy in well drained soils with some protection from direct summer sun. It will not tolerate boggy conditions but does appreciate extra watering during extended dry periods. It also makes quite an attractive container plant. Subsp.taxifolia is rarely seen in cultivation but should respond to similar conditions. From a horticultural point of view, subsp.macrolaena is the more desirable form.

Seed of Darwinia species, generally, is not easy to germinate. The species can, however, be grown fairly easily from cuttings of hardened, current season’s growth. 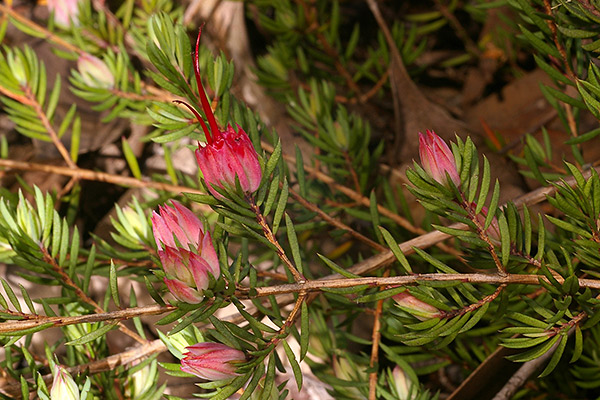