Major taxonomic revision of the Dendrobium group has occurred in recent years with many species being transferred to new genera. Some of these changes have been reasonably widely accepted while the status of others is less certain. The taxonomy of Dendrobium bigibbum is also confused. In 2002, Clements and Jones* re-classified it as Vappodes phalaenopsis but this re-classification has not be taken up in the Australian Plant Census (which ANPSA accepts as the authority Australian plant taxonomy).

Dendrobium bigibbum (the “Cooktown Orchid”) is the floral emblem of Queensland and is probably the best known and most colourful of Australia’s orchid species. It is an epiphytic orchid which means that it grows on the trunks and branches of trees and receives nutrients through the break down of leaf litter that accumulates around its root system.

The plant occurs in the forests of Queensland north from around Cooktown and it is common on the Cape York Peninsular. The purple or mauve flowers are borne on long, terminal racemes and there may be as many as ten flowers on each raceme. Flowers are large, being up to 65 mm in diameter. Occasionally white flowered forms are seen.

The “Cooktown Orchid” has been cultivated for many years by orchid enthusiasts and has been used in hybridisation work with other Australian and exotic “hard cane” dendrobiums. It grows fairly easily in cultivation in sub-tropical and tropical areas where cultivation in a bush house is adequate. In temperate districts the plant requires a heated glasshouse although it can be flowered (with luck!), in temperate coastal areas in a very warm bush house. Plants can usually be obtained through specialist orchid breeders. 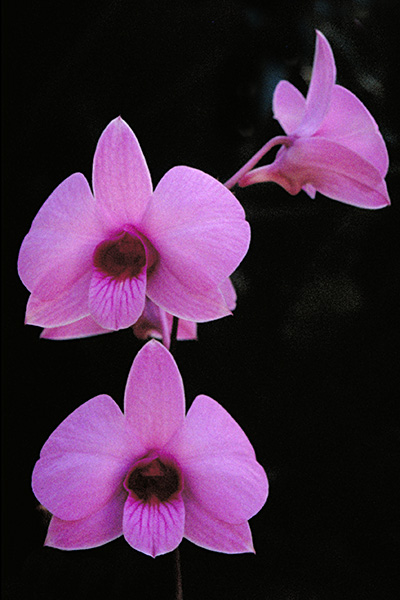