Diuris is a genus of about 50 species all of which occur only in Australia except for Diuris fryana which is found in Timor. They are among the most easily recognised of Australia’s terrestrial orchids because of the large ‘ear-like’ petals. Many are known as ‘Donkey Ear” orchids for this reason but the name ‘Doubletails’ is also common due to the arrangement of the lateral sepals.

Diuris corymbosa is a terrestrial herb comprising 2 or 3 narrow leaves to 20 cm long. The flowers are about 25 mm in diameter and occur on stems 20-30 cm high with 1 to 5 flowers per stem. The flower colour is mainly yellow with reddish-brown and mauve markings. Flowering usually occurs in early to mid spring and the plants become dormant in summer when they die back to an underground tuber.

D.corymbosa is reported to be one of the more easily grown terrestrial orchids but it is cultivated mainly by orchid enthusiasts. Generally the plants are grown in pots in a freely draining, acid mix in a sunny location. The tubers should be left to multiply to promote best flowering and need to be kept dry during the dormant period. 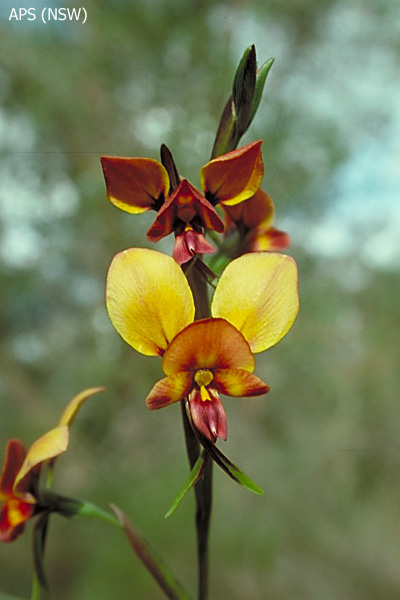