Dodonaea is predominantly an Australian genus which is well distributed in all states. There are 69 species and 60 of them are endemic to Australia. They are commonly called ‘hop bushes’ because the colourful fruits resemble the fruits used in brewing

Dodonaea boroniifolia is a small to medium, spreading or upright shrub to about 2 metres high. The foliage is pinnate (compound leaves made up of a number of leaflets) with leaves to around 40 mm long sometimes sticky to the touch and with a toothed apex. Like most dodonaeas, male and female flowers are usually borne on separate plants (dioecious) but apparently bisexual plants are also known. The flowers are visually insignificant and are followed by 4-winged fruits which are pink to deep red when mature.

Dodonaea boroniifolia is reasonably popular in cultivation as it is has both colourful fruits and attractive foliage. It requires a well drained position in full sun or dappled shade. It will tolerate at least moderate frosts. Pruning during fruiting for indoor decoration helps to maintain a bushy shape.

Propagation can be carried out from seed following pretreatment in near boiling water. However, for horticultural purposes, propagation from cuttings is the preferred method as this ensures that plants (with the attractive fruits) are propagated. For further information on propagation, see Dodonaea – The Hop Bush, in Issue 27 of Australian Plants online. 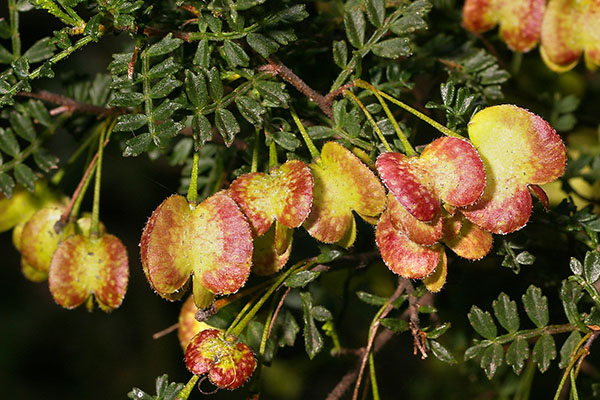