Dodonaea is predominantly an Australian genus which is well distributed in all states. There are 69 species and 60 of them are endemic to Australia. They are commonly called ‘hop bushes’ because the colourful fruits resemble the fruits used in brewing.

Dodonaea viscosa is a very variable species with several subspecies recognised. In habit it ranges from a small shrub to a small tree up to 8 metres high. Features of the various subspecies found in Australia are:

Like most dodonaeas, male and female flowers are borne on separate plants (dioecious) but they are visually insignificant. The 3-4 winged fruits vary in colour from cream to red. These only occur on female plants.

In cultivation, the various forms generally require a light, well-drained soil in a sunny position. They are generally very hardy and worth growing for the colourful fruits. A purple foliaged form is in cultivation – this grows into a bushy shrub up to 3 metres high but is believed to be of New Zealand origin. Most forms will tolerate at least moderate frosts and withstand extended dry conditions.

Propagation can be carried out from seed following pretreatment in near boiling water. However, for horticultural purposes, propagation from cuttings is the preferred method as this ensures that female plants (with the attractive fruits) are propagated. For further information on propagation, see Dodonaea – The Hop Bush, in Issue 27 of Australian Plants online. 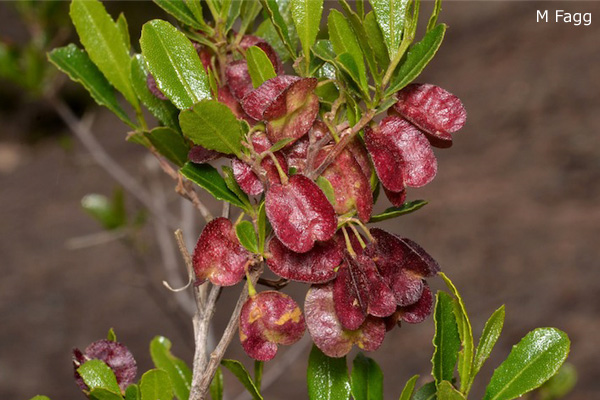 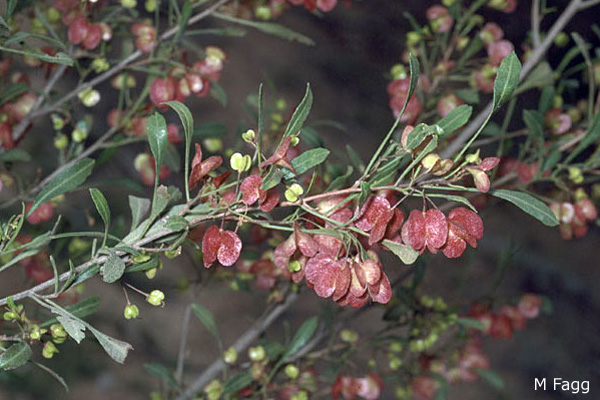