Epacris longiflora is common in moist sandstone gullies around the central coast of New South Wales and is also found further north in that state and around the NSW/Queensland border. It is typically a fairly straggly shrub comprising several long, arching branches and is usually less than a metre in height. The leaves are small and triangular in shape with a sharp point.

The flowers are narrow and tubular, up to 40mm long and occur along the branches. They contain nectar and are frequented by honey-eating birds. The typical colour is red with a white tip but some variations are in cultivation such as a fully white form. In nature, the plant almost always has some flowers present but cultivated plants seem to have a peak during summer-autumn.

The species should be given a well drained position in semi shade but should not be allowed to dry out. It is also a very attractive plant for a container where the arching branches are seen to best advantage. The plant responds to pruning but this produces a more compact plant at the expense of the natural arching habit.

Propagation of E.longiflora is usually by cuttings of firm current season’s growth. Like most epacrids, the roots are very fine and easily damaged during transplanting. Cuttings are probably best placed into individual small pots or tubes to minimise root disturbance. The species can be grown from seed but this is not readily available. 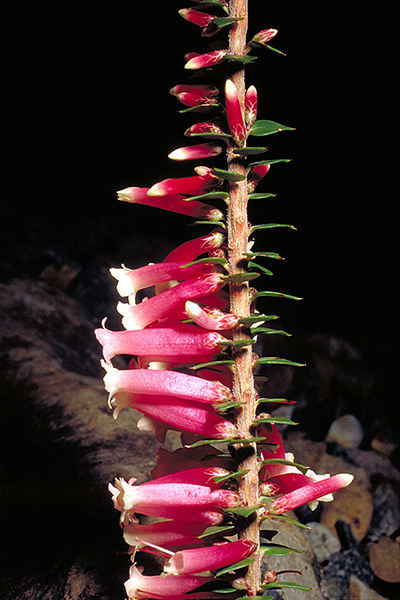