Eremophila debilis was previously known as Myoporum debile and is still commonly sold and cultivated under that name. It is usually a low, trailing plant with weak, fleshy stems and spreading to around 1.5 to 2 metres in diameter. Some forms may be partially upright in habit to about half a metre. The plant is common in dry, woodland areas and may also be found on grazing land. The leaves are lance-shaped to around 4-5mm long and mid, glossy green in colour. The leaf margins may be entire or slightly toothed.

The small flowers occur in the leaf axils and are usually pale mauve but white and blue forms are also found. The main flowering period is summer but spasmodic flowering may occur at other times. The fleshy fruits that appear in autumn are perhaps the most attractive feature of the plant. They are about 1cm in diameter, green in colour with pink or reddish tonings.

E.debilis has been in cultivation for many years and is a reliable groundcover for many areas. It is suited to a range of soils provided drainage is reasonable, and is best located in a sunny position. Severe frosts may damage the plant but it will often recover quickly once the weather warms up.

Propagation of E.debilis from cuttings is very easy using hardened, current season’s growth. There may be potential for the use of E.debilis as a root stock for some of the more difficult to grow eremophilas. 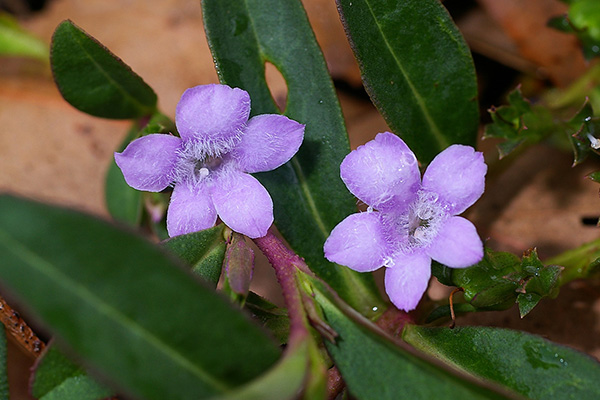 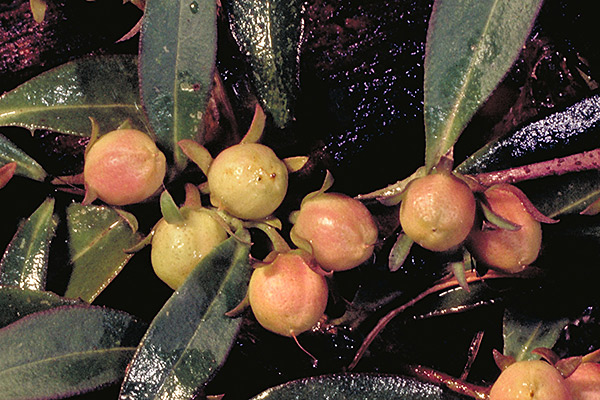