Eucalyptus sideroxylon is one of the best known of the Ironbarks as there is an isolated population in the western area of Australia’s largest city, Sydney. There are two subspecies recognised; subsp. sideroxylon is the common form found over most of the range of the species except that it only has a very slight incursion into Victoria. Subsp.tricarpa is found along the south coast of New South Wales, the north-east coast of Victoria and in central Victoria. The latter differs from subsp. sideroxylon in having fewer flowers in its inflorescence, larger buds and fruit and broader juvenile foliage.

Red Ironbark is a useful timber tree and its very hard wood has been used for heavy construction and railway sleepers. It is a tree which may be from 10 to 30 metres in height with the hard, furrowed bark which is typical of Ironbarks. The bark is persistent and deep brown to black in colour. The foliage is dull, greyish-green in colour and is used for extraction of volatile oils.

Flowers are normally well displayed and are usually white. However, pink and red flowering forms are fairly common with both recognised varieties and are popular in cultivation.

E.sideroxylon is suitable for medium to larger gardens and is hardy in a wide range of soils and climates. The tree is frost tolerant.

Propagation is from seed which germinates readily. Because of the genetic variation that occurs with seedlings, the red and pink flowered forms cannot be guaranteed to come true to type. However, a reasonably high percentage of seedlings do produce coloured flowers. 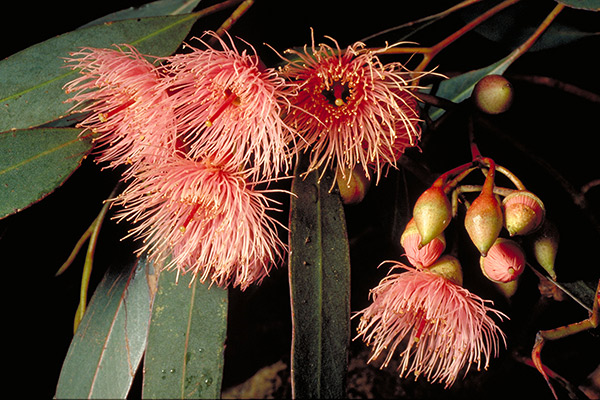