Eucalyptus torquata is a small to medium-sized, spreading tree from 4 to 10 metres high with rough, persistent bark on the trunk and often also on the larger branches. The leaves are lanceolate, 90-120 mm long by 15-20 mm wide and greyish green in colour. The flower buds are distinctive, having a rough, corrugated base to both the bud itself and the cap (operculum), which tapers to a long point. The flowers are large (up to 35 mm in diameter) and normally coral-pink but white, cream and red flowered plants are known. Flowering is very conspicuous and occurs in spring to summer. Flowering often occurs in 2 years from seed.

As a species native to relatively dry areas, E.torquata is best suited to cultivation in climates which have a dry summer. It has been grown in humid districts but cannot be regarded as reliable in those areas. In suitable areas, coral gum is an outstanding ornamental plant and can be grown in a large container. It is also often used as a street tree in inland areas. The plant needs well drained soils and is resistant to at least moderate frost. It also responds to pruning if required.

E.torquata is one parent of the well known cultivar “Torwood” (the other parent being E.woodwardii). However, the hybrid is nor stable and considerable variation in habit and flowering can be expected.

Propagation of E.torquata is from seed which germinates readily. 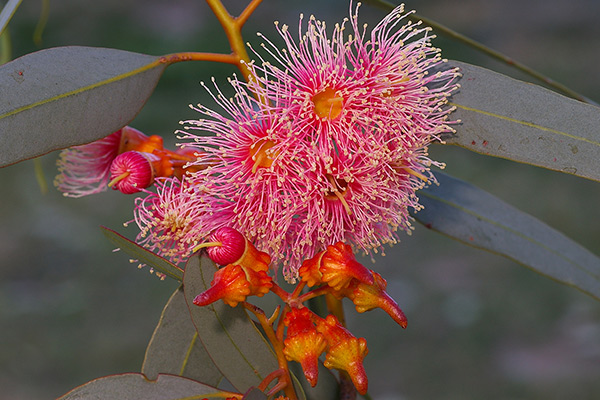