Exocarpos is a genus of about 26 species, 10 of which occur in Australia. Other species occur throughout the Pacific islands and in New Zealand. The members of this genus are at least partly root parasites in that their roots attach themselves to the roots of other plants and gain part of their growth requirements from the host species.

Exocarpos cupressiformis is the best known and most widespread species. It has the general appearance of a conifer with attractive weeping foliage of yellowish-green to dark green colour. It will often be seen growing along roadsides close to eucalypts which it apparently uses as hosts. The small cream flowers are inconspicuous and are followed by the fruit which is a small nut about 0.5 cm in diameter. The nut is attached to a fleshy fruit-like structure which is actually an enlarged, succulent section of the flower stalk. The enlarged stalk (which is edible) is usually bright red and gives rise to the common name of the species.

Propagation and establishment of E.cupressiformis is difficult due to the parasitic nature of the plant. Some success has being achieved in propagation from both seed and cuttings but plants generally do not survive once planted out. 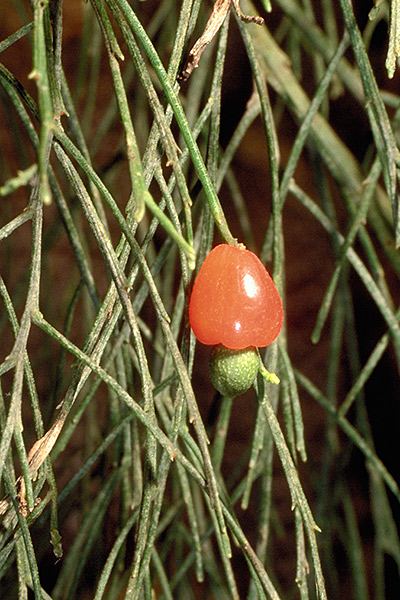