Faradaya is a genus of about 18 species which are found in Australia, Indonesia, Polynesia and Papua New Guinea. Faradaya splendida is the sole Australian representative – it is found in far north Queensland.

Faradaya splendida is a very vigorous, twining plant which can spread over large areas. It is often seen in rainforest margins in locations such as road verges. The leaves are glossy green, ovate (tapering to a point) and can be up to 300 mm long. The tubular, white flowers are also quite large (up to 60 mm across by about 50 mm long) with four spreading lobes. The flowers are usually short lived but very abundant and are fragrant. The fleshy fruit is whitish, egg-shaped and about 80 mm long. Each fruit bears a single seed.

The bark of this species was used by aborigines as a fish poison.

Faradaya splendida is a hardy plant for tropical and sub-tropical areas but, due to its vigour, it is unsuited to small gardens. The plants will tolerate shade but flower better where sunlight is available for a large part of the day. The species is adaptable to a range of soils but requires plenty of water.

Propagation can be achieved either through fresh seed or from cuttings which strike readily. 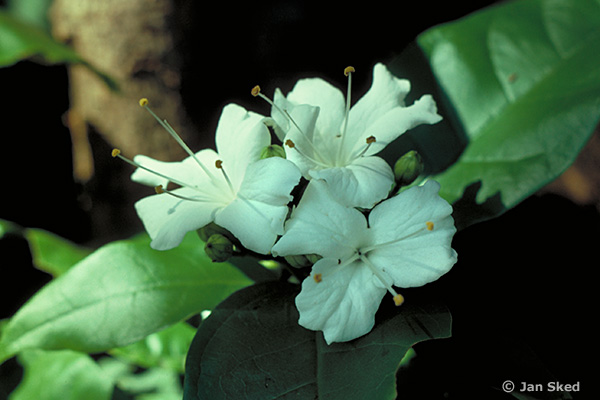