The genus Ficus consists of about 800 species distributed throughout India, parts of Asia, the Pacific islands and Australia. There are about 40 Australian species most of which are found in tropical areas.

Ficus watkinsiana is one of a number of species known as “strangler figs”. The seeds of these plants germinate high on the branches of other rainforest trees and send down aerial roots. When these reach the ground, they take root, thicken and gradually enclose the original tree which dies and rots away. Eventually a fig tree with a hollow trunk is formed.

This species forms a large tree over 30 metres high with a similar spread. It has large, oval-shaped leaves about 200mm long and has a milky sap. The purple, rounded fruits are 40mm long and are edible.

Despite the habit of strangler figs in the wild, they can be grown as free-standing plants in cultivation. However, F.watkinsiana is far too large for a normal suburban garden but is an excellent shade tree for parks and larger properties. Despite its tropical/sub-tropical origin, it will grow successfully in temperate areas. It is adaptable to a range of soils and appreciates adequate moisture. It also makes an excellent plant for cultivation both indoors and outside.

Propagation is usually from seed which germinates well without any pretreatment. Cuttings also strike successfully. 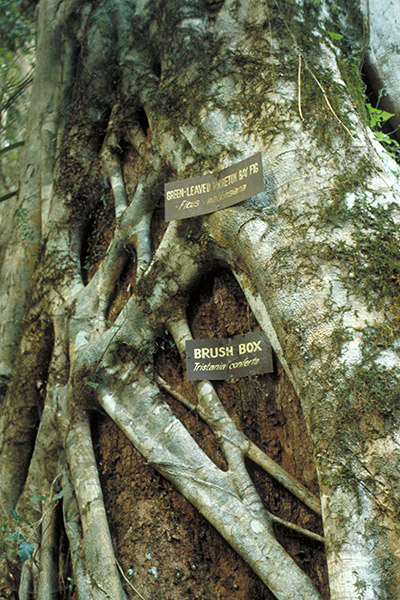