The genus Gastrolobium consists of over 100 species*, all but two of which are found only in Western Australia. Recent botanical revision has seen all members of the genus Brachysema transferred to Gastrolobium. They are generally small shrubs ranging from prostrate in habit to about 2 metres.

Many species of Gastrolobium are known to be poisonous and some have been associated with stock poisoning. Because of this, few gastrolobiums are cultivated, the exceptions being a number of species previously in Brachysema.

Gastrolobium celsianum is the most commonly cultivated species, often under its older names of Brachysema lanceolatum and Brachysema celsianum. It is a variable species in habit, often low and scrambling but also found as a shrub up to 2 metres in height. The scrambling habit tends to develop when the plant is grown in close proximity to other plants. It this situation it may adopt a semi-climbing habit by becoming intertwined with the other plants. It has quite large, rounded or lance-shaped leaves which are green on the upper surface but silvery-grey and hairy below. Leaves are about 7-10 cm long.

The typical “pea” flowers consist of 4 petals; the “standard”, the “keel” and two “wings”, as shown in the diagram. The flowers of G.celsianum differ from the typical shape in having a much shorter standard than is typical. The flowers are bright red, about 25 mm long and occur in the leaf axils in winter and spring.

Swan River pea is adaptable to a wide range of soils and climates in sun or semi shade. It grows well in humid areas of the Australian east coast where many other plants from Western Australian do not thrive. Its flowers produce nectar attracting honey-eating birds and it tolerates at least moderate frosts. 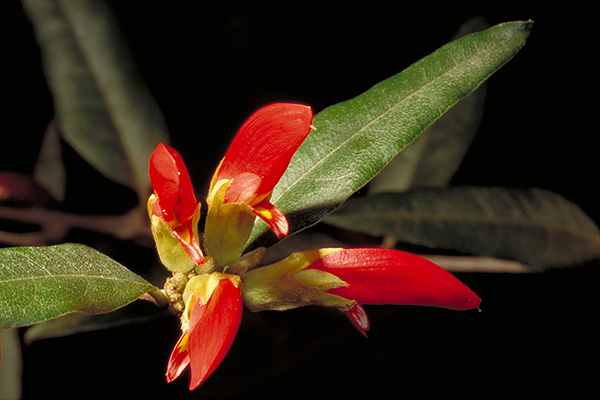