Goodia is a genus of only two species. G. lotifolia is a common pea-flowered plant of moist eucalypt forests or of dry forests in protected situations. There are two recognised varieties; var.lotifolia and var.pubescens. The latter (which is found in Tasmania and Victoria) is characterised by having short hairs on branches, flower stalks and on the under-surface of the leaves, and is sometimes regarded as a separate species (G.pubescens).

Goodia lotifolia is a small to medium, spreading shrub of fairly open habit. It may reach 3 metres high is some situations but is usually smaller in open positions. The leaves are glossy, blue-green and divided into three leaflets.

The typical “pea” flowers consist of 4 petals; the “standard”, the “keel” and two “wings” as shown in the diagram. In Goodia lotifolia the flowers are bright yellow with a red centre, about 12 mm in diameter and occur profusely in spring.

This plant has been in cultivation for many years but does not seem to be grown as widely as it deserves. It is generally a very hardy garden plant which is suited to a range of soil types, provided drainage is good. It will grow in full sun but is more attractive in dappled shade. It should not be allowed to dry out. 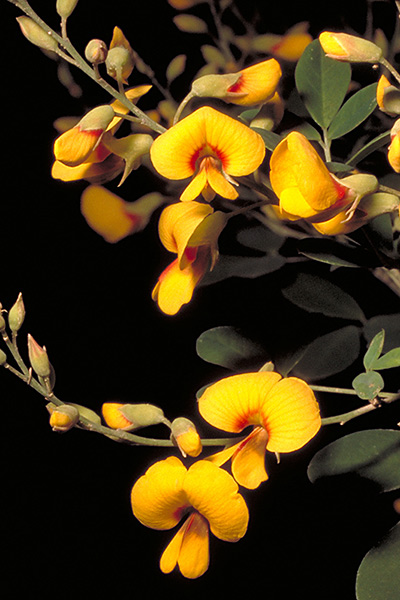