Despite the specific name, this grevillea is a widespread species occurring at both low and high elevations. It is a very variable species with numerous forms occurring in the wild but no separate varieties or sub-species are recognised botanically.

Grevillea alpina is usually a small shrub of up to a metre in height but some forms may reach up to 4 metres. It has small, simple leaves which are elliptical in shape and usually about 10 mm long by about 8 mm wide but, again, some forms may have much larger leaves. Leaves are often distinctly hairy. The flowers appear in clusters in winter and spring at the ends of the branches. Flower colour is variable ranging from greenish yellow through to orange and red.

Many forms have been brought into cultivation, particularly from various Victorian populations. For further information on the range of cultivars see:

As might be expected with such a variable plant, its reliability in cultivation is also variable. Most forms perform best in areas where summers are not humid. It is not really suitable for sub-tropical and tropical areas. It prefers a location in well-drained soils in full sun.

Propagation can be carried out from seed (preferably fresh and with the seed coat “nicked” to expose the embryo slightly prior to sowing). Cuttings usually strike well and this method must be used to reproduce specific forms (the species hybridises with other grevilleas readily and seed from cultivated plants is usually of hybrid origin). The species has been successfully grafted using a range of species as rootstock. 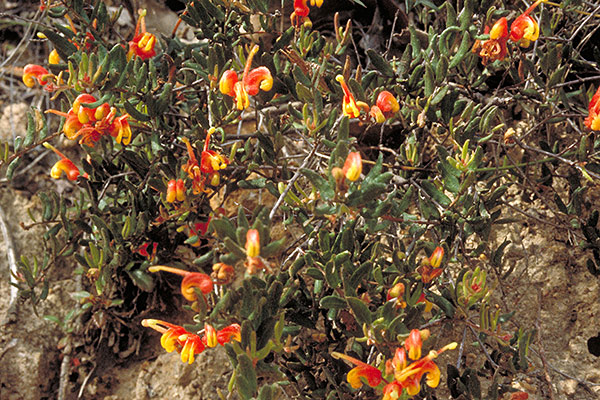