Grevillea batrachioides was collected by James Drummond probably about 1851-1852 in Western Australia but no definitive location was recorded. The species was not officially named until 1986 when, as part of his overall revision of the genus Grevillea, Don McGillivray described the species based on Drummond’s collection. Grevillea batrachioides was presumed extinct since no new collections appeared among the specimens examined during the revision of the genus. It was assumed that clearing for agriculture had either eliminated it or pushed it to the edge of extinction.

In 1991 the species was rediscovered by Peter Olde, during research for “The Grevillea Book” of which he is co-author with Neil Marriott. Ten plants of G.batrachioides were found on Mt. Lesueur about 250 km north Perth.

The species is a medium shrub to about 2 metres. The crowded, deeply divided grey-green leaves have sharp points at their ends giving an overall prickly habit. The flowers appear in late spring and are conspicuous and terminal at the ends of branches. They are pink or cream/pink in colour.

Because of its rarity, G.batrachioides has only been in cultivation for a few years. It is being tested by a number of specialist growers and botanic gardens in several climate zones. Based on its natural habitat it is expected that the species should be successful in areas with fairly dry summers and it may prove more difficult in humid, wet summer districts such as coastal New South Wales and Queensland. In those areas grafting onto a hardy rootstock may be necessary for long term growth.

When the species reaches the stage where plants are more widely available, it should prove to be a welcome addition to Australian plant gardens in suitable areas, particularly as it appears to be a ideal size for average-sized gardens and can be expected to attract and offer protection to birds. 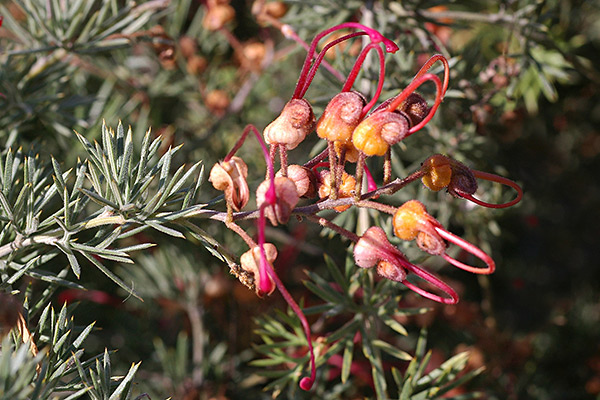