Grevillea dryandroides is a very spectacular, small shrub with grey, fern-like leaves and racemes of red flowers on stems spreading beyond the foliage. Two subspecies are recognised: subsp. dryandroides and subsp.hirsuta, the latter having longer leaf lobes (> 12 mm long) and several other differences.

Flowering occurs in spring but spasmodic flowering may occur through summer. The flowers, although conspicuous, are probably of less importance horticulturally than the foliage which would be a feature in most gardens. The plant reaches about 0.3 metres in height and spreads to around 1.5 metres in diameter.

The species is in limited cultivation but, like many species native to the dry summer climate of south-west Australia, it is difficult to grow in humid areas of Australia’s east coast. Grafting may improve its reliability.

G.dryandroides prefers a sunny position and is tolerant of moderate frosts.

Propagation is best from cuttings as seed is rarely available. 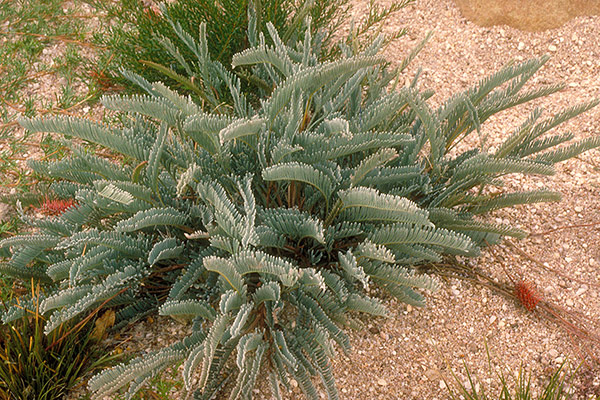