Grevillea iaspicula is a relatively recent discovery and was first described botanically in 1986. It is a small to medium shrub reaching 1-2 metres. Leaves are oblong to about 25 mm and end in a fine point. The leave margins are recurved (curve inwards). Flowers occur in pendulous “spider flower” clusters and are white with reddish areas and with red styles. They are well displayed at the ends of short branchlets and occur in winter and spring.

Wee jasper grevillea is very rare in the wild and certain populations are known to have been destroyed by wild fires. Efforts are being made (September 2003) to reintroduce plants into the wild.

G.iaspicula has only been in cultivation for a few years. It is being tested by a number of specialist growers and botanic gardens in several climate zones. Indications are that it is an adaptable garden plant which tolerates a range of well drained soils, preferring sunny or semi-shaded situations. It responds well to pruning and is tolerant of heavy frosts. The species is an ideal size for average-sized gardens and attracts birds.

The species is becoming available in specialist native plant nurseries and may be propagated from cuttings which strike fairly readily. 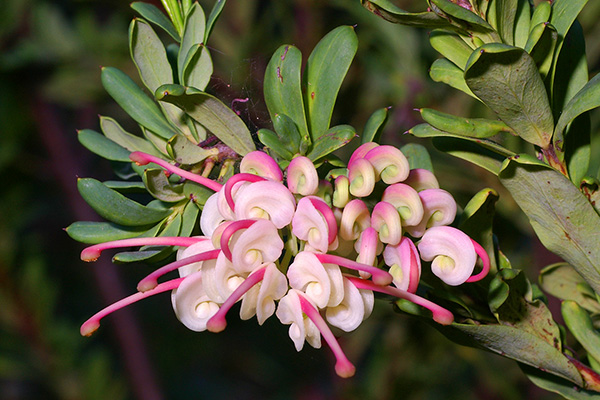