Grevillea juniperina is a variable species which occurs in prostrate or decumbent forms as well as shrubby forms from 1 – 2.5 metres high. The leaves are linear from 5 to 35 mm long terminating in a pungent point. In some forms the pungent tip is very sharp. Flowers clusters are of the typical ‘spider’ form occurring in the leaf axils and at the ends of the branches. Flower colour may be greenish-yellow, yellow, apricot, pink or red. Copious quantities of nectar are produced which attract many birds and insects.

G. juniperina is a well known member of the genus, having been in cultivation for many years either as a form of the species or as one parent of numerous hybrids. There are several different forms, which are described in more detail in The Grevillrea Book Volume 2 (P. Olde and N. Marriott, 1995):

Juniper-leaf grevillea is a hardy and adaptable species which grows well in most well-drained soils. It prefers a sunny location but will accept dappled shade and it is tolerant of moderate to heavy frost. A particularly hardy and showy form is the cultivar known as ‘Molonglo’ – a hybrid between an upright, red-flowered form and a yellow, prostrate form. This cultivar was developed at Australian National University in the 1960s and is a low, spreading plant with apricot coloured flowers.

Propagation may be carried out from seed and germination is improved if the seed is carefully “nicked” with a sharp knife to expose the embryo. Cuttings of current seasons’ growth are also successful and this is the method that must be used for named forms as they will not come true from seed. 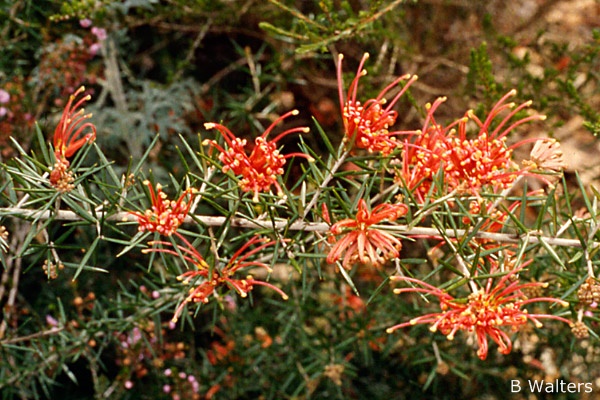 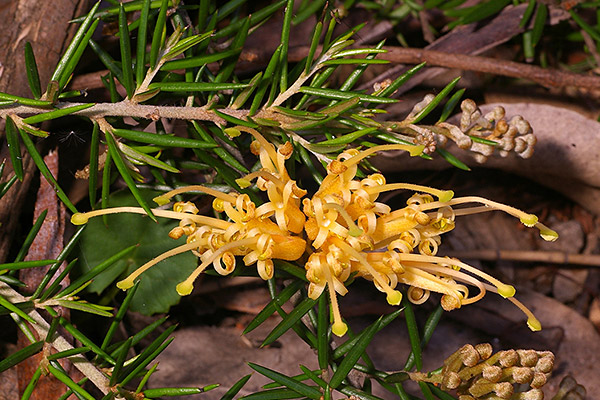