Grevillea magnifica was previously regarded as subspecies magnifica of G.petrophiloides. It is also closely related to G.oligomera. Two subspecies of G.magnifica are recognised:

Grevillea magnifica is an erect, open shrub to 4 metres high with most flowers held erect on floral stems above the foliage but some flowering also occurs within the outer foliage. The flower racemes are 10 – 20 cm long and the flower colour is usually deep pink with a white style. Flowering usually occurs in winter and spring. The foliage is dark green, finely divided and held quite erect.

This is a very ornamental species which is worthy of widespread cultivation. To date it has been grown mainly by enthusiasts and its adaptability to cultivation is poorly known. Reports suggest that is is easier to grow than G.petrophiloides but it is still likely to be difficult to maintain in areas of high summer humidity. Excellent drainage would be required. Some success has been achieved in unsuitable growing areas through grafting.

Propagation may be carried out from seed and germination is improved if the seed is carefully “nicked” with a sharp knife to expose the embryo. Cuttings should also be successful using firm, current season’s growth. The species has been successfully grafted using Grevillea “Poorinda Royal Mantle” and one or two other Grevillea species/cultivars as rootstock. It may not be compatible with G.robusta as rootstock even though this has proven to be a good stock for many other grevilleas. 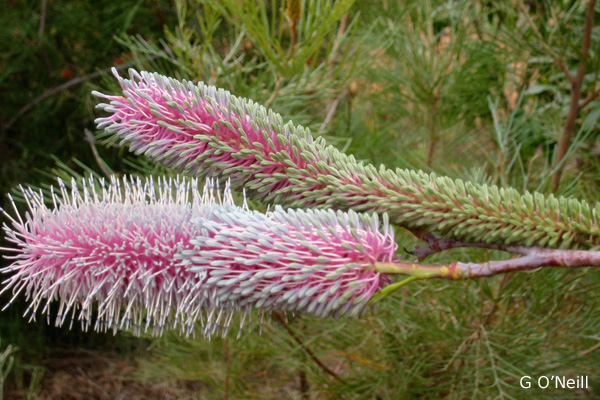