Grevillea scapigera is one of Australia’s most “at risk” species. It is known only from a few small populations, mainly road verges.

Grevillea scapigera has a prostrate habit of growth and may spread to about 2 metres in diameter. Despite its rarity, there are distinct differences between the various populations, mainly in features associated with the foliage. Generally the leaves are pinnately lobed into 5 or more segments and are up to 75 mm long. In some populations the leaves are greyish (glaucous). The white or cream flowers appear in globular clusters about 40mm in diameter on very long stalks held above the foliage. Flowers occur in spring to summer and develop into unusual boat-shaped seed capsules covered with “warty” protuberances.

Because of its rarity, G.scapigera has received only limited cultivation. In common with many species from south Western Australia, it is difficult to maintain in areas with humid summers. Some success has been achieved in grafting this species onto a variety of Grevillea rootstocks but there is some evidence of incompatibility after 4-5 years.

G.scapigera strikes readily from cuttings and has been propagated by tissue culture at Mt Annan Botanic Garden in south-west Sydney. 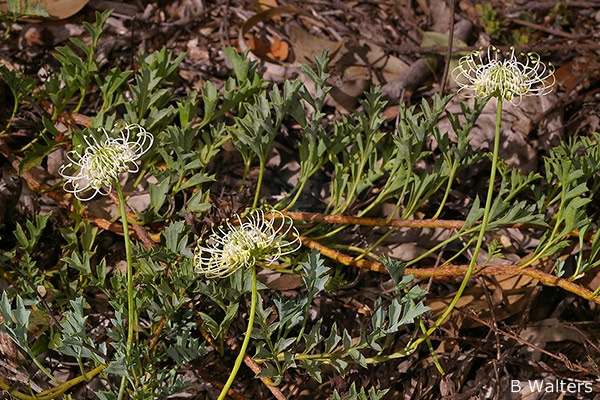