G.wilkinsonii was first discovered in 1991 along the banks of the Goobarragandra River near Tumut in NSW. It is a shrub 1.5 to 2 metres high x 2 metres wide with oblong, toothed leaves which can be up to 170 mm long by 25 mm wide. The mauve to purple flowers are typical of the “toothbrush”-flowered grevilleas where the individual flowers are arranged in a terminal one-sided raceme. Flowers occur during winter and spring.

This species has only been in cultivation for a short period but appears to be hardy and reliable in temperate climates of the east coast. It prefers well drained soils in a sunny position. The species is performing exceptionally well at the National Botanic Gardens in Canberra and should become a very popular species when plants become more widely available. Like most grevilleas, the flowers attract honey-eating birds.

Because of its rarity, seed is not available but would probably germinate well if “nicked” with a sharp knife prior to sowing. Limited experience indicates that cuttings from firm, current season’s growth strike reliably. 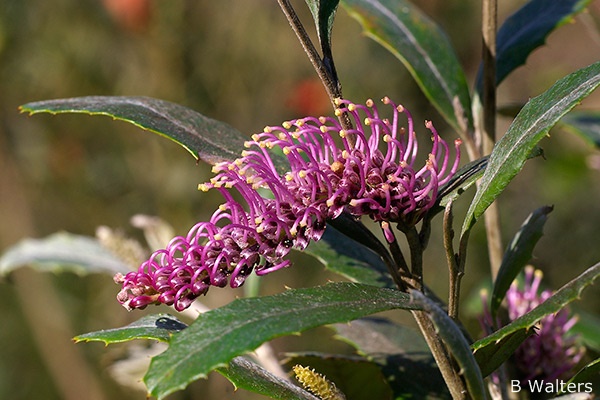