Grevillea williamsonii was originally discovered in 1893 on Mt. Abrupt at the southern extremity of the Grampians/Gariwerd Ranges in Western Victoria. This area was burnt out by a bushfire four years later and, despite a number of searches, no further plants were found. It was assumed that the plant was probably a hybrid of G.aquifolium or a hybrid of that species. However, in 1992, plants identical to the original collection were discovered in the same general area as the original collection. Presently less than 10 mature plants are known in the wild.

The species is closely related to G.illicifolia and is a dense shrub, 1 m x 1 m, with a distinct horizontal layering habit. It has ashy, grey-green foliage and masses of small, yellow toothbrush flowers which age to pink.

Because of its rarity, the plant is not in general cultivation although is being grown at several Botanic Gardens. If these cultivated specimens are successful, the species may eventually find its way into the general horticultural community. G.williamsonii is likely to be readily cultivated in temperate areas but may prove difficult to grow in tropical and sub tropical climates. 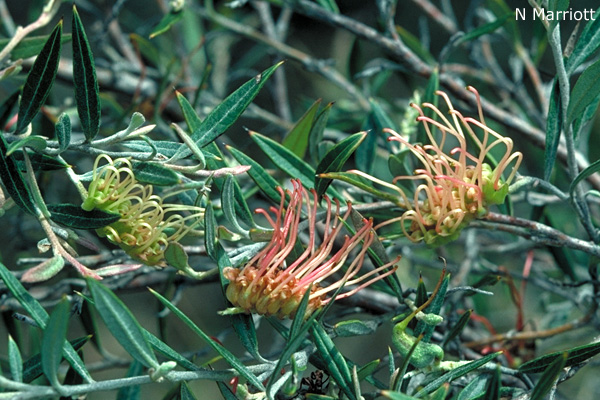