Hakea francisiana is a large shrub up to 4 metres high with linear leaves up to 150 mm long x 3 mm wide. The species is similar to H.bucculenta and H.multilineata and all have fairly fairly similar cultivation requirements.

The flowers of Hakea francisiana occur in large racemes up to about 100 mm long which are seen in the leaf axils in winter and spring. The flower colour is usually red or reddish purple but the form previously known as H.coriacea is usually cream flowered with a pink centre. Although the flowers occur within the foliage, the open habit of the plant means that they are well displayed, never failing to attract attention. Flowers are followed by woody seed pods about 20mm long containing two winged seeds, the usual number for all Hakea species. The pods do not shed the seed until stimulated to do so by environmental conditions (eg after a bushfire).

Hakea francisiana is easily grown from seed. Cuttings may succeed but these may not be particularly easy to strike and often do not produce a strong root system. Grafting of the species onto the eastern species H.salicifolia has proved to be very successful and has enabled the plant to be grown in previously unsuitable areas. Grafted plants are now appearing in specialist Australian plant nurseries in eastern Australia. 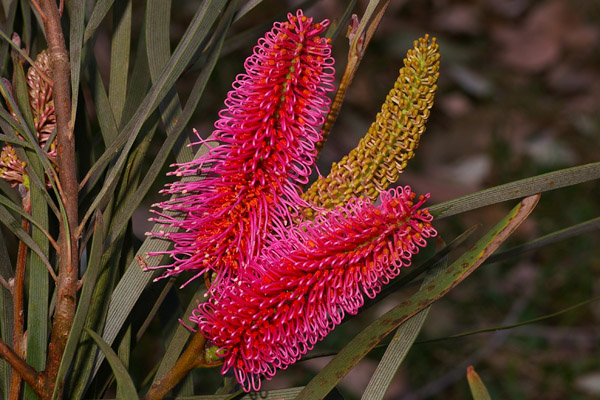 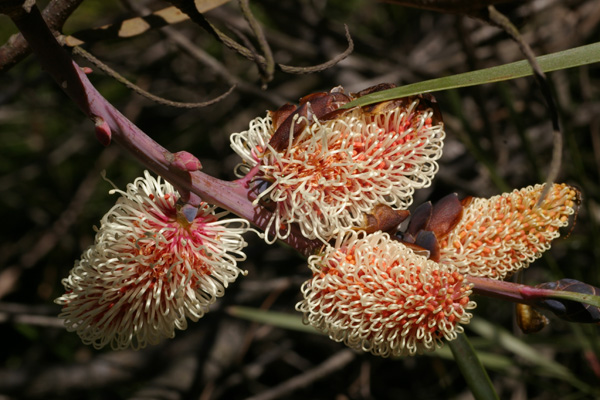