Hakea nodosa is a medium-sized shrub which may reach 3 (occasionally 4) metres high by a 3-4 metre spread. Smaller forms exist which grow to only 1-2m high (eg. a form from the Grampians area in western Victoria with deep yellow flowers). The leaves are bright green, rounded in cross section (terete) and needle-like, generally 40-50mm long by 1-2mm wide. Flowers occur from April or May to August, producing cream to deep yellow blooms along the branches. Their odour has been described as fragrant by some and smelly by others. The flowers are followed by woody seed pods about 30 by 35mm containing two winged seeds, the usual number for all Hakea species. The pods do not shed the seed until stimulated to do so by environmental conditions (eg after a bushfire).

In nature, Hakea nodosa grows on a wide range of conditions and soils, ranging from clay loam to sandy. In cultivation, it has proven to be hardy in a range of climates and soils and makes an ideal plant for the beginner. It will grow successfully in full sun to part shade and is a good habitat plant for local fauna, especially in areas where it is indigenous such as Melbourne’s northern and eastern suburbs.

H. nodosa has been mainly grown by enthusiasts, though is sometimes seen in general nurseries. In areas where it is indigenous, the best way of obtaining it may be checking with local community nurseries and bushcare groups.

The species is easily grown from seed. Cuttings of firm, current season’s growth may succeed but usually strike slowly and unreliably. 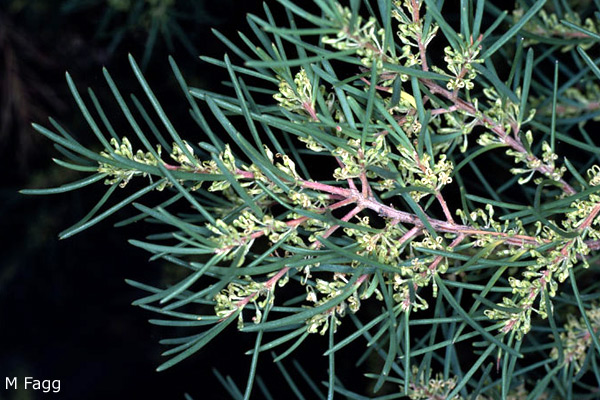