Hakea petiolaris is an erect shrub to small tree reaching 2-9 metres in height. It has recently been divided into three subspecies on the basis of leaf size and flower colour. The attractive, pale grey-green leaves are broadly obovate in shape and range from 5-15cm long by 2.3-6cm wide. Flowers are seen in late autumn and early winter and occur in globular-shaped clusters, rather like a sea urchin (hence the common name), each containing 120-200 individual flowers. Young inflorescences are creamish in colour. As they age, the style remains cream while the perianth darkens.

The characteristics of the three subspecies are:

The flowers are followed by woody seed pods about 40mm long by 15mm wide containing two winged seeds, the usual number for all Hakea species. The pods do not shed the seed until stimulated to do so by environmental conditions (eg after a bushfire).

H.petiolaris has been mainly grown by enthusiasts and is not often seen in nurseries. It appears to be reliable in Mediterranean climates, though has been grown with some success in subtropical gardens as long as the soil is well drained and preferably acid. Like many Western Australian plants, it is susceptible to root rot in humid eastern summers but appears to be hardier than many other western hakeas. It is fairly quick growing and appears to be tolerant of moderate frosts. The flowers are attractive to honeyeating birds and the species is best grown in an open, sunny position.

The species is easily grown from seed. Cuttings are also successful but need to be firm, current season’s growth. 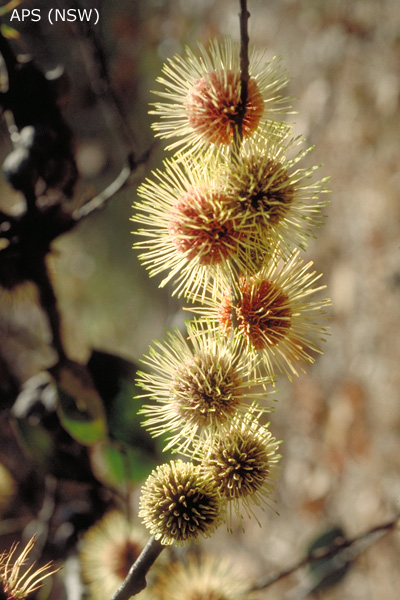