Hakea purpurea is an erect shrub from 1 to 3 metres in height. The leaves are terete (round in cross section) up to 75-100 mm long and usually divided into 2 to 4 narrow segments with a pungent tip. Flowers are seen in late winter and spring and occur in clusters from the leaf axils. The flower colour is reddish-purple to purple. The flowers are followed by woody seed pods about 40mm long by 15mm wide containing two winged seeds, the usual number for all Hakea species. The pods do not shed the seed until stimulated to do so by environmental conditions (eg after a bushfire).

Hakea purpurea is one of the best of the eastern hakeas because of its low growth habit and colourful flowers. It is not widely grown but should become more popular as it has proven to be hardy in a range of well drained soils in sun or partial shade. It seems to be tolerant of moderate frosts. The flowers are attractive to honeyeating birds.

The species is easily grown from seed. Cuttings are also successful but need to be firm, current season’s growth. 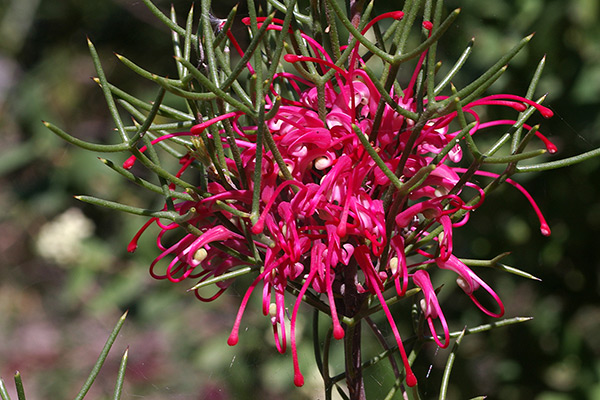