Hakea salicifolia was previously known as H.saligna. It is a large, bushy shrub or small tree up to 5-8 metres high. Leaves are narrowly elliptical up to 100 mm long x 20 mm wide (a narrow leaf form is known with leaves about 5 mm wide). Flowers are white and occur in the the leaf axils. They are generally seen in late winter to spring. These are followed by woody seed pods about 20mm long containing two winged seeds, the usual number for all Hakea species. The pods do not shed the seed until stimulated to do so by environmental conditions (eg after a bushfire).

This species has been in cultivation for many years and is commonly planted as a small, bushy street tree. It is not a spectacular species but usually forms a neat, compact plant. The species has been cultivated over a range of climates and is especially successful in temperate and sub-tropical areas. It is suited to a range of well drained soils and is best grown in an open, sunny position.

Two forms of this species that are well known in cultivation are the narrow foliaged form and a form with cream and pink foliage known as ‘Gold Medal’.

Because of its reliability, H. salicifolia is widely used as a rootstock for grafting more difficult to grow species, particularly the spectacular grass-leaved hakeas from Western Australia such as H.bucculenta, H.francisiana and H.multilineata.

Hakea salicifolia is easily grown from seed which does not require any pre-treatment. Cuttings are also successful. The cultivar ‘Gold Medal’ needs to be propagated by cuttings (which can be slow to strike) as seed will not come true to type. 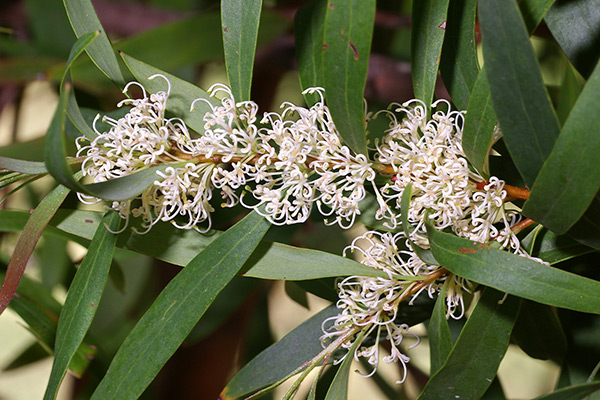