Hemiandra is a small genus of about 8 species all of which occur only in Western Australia. The genus is closely related to the better known Prostanthera, the “Mint bushes”. All hemiandras are small to prostrate shrubs with colourful mauve to red flowers. The best known is H.pungens which has been in cultivation in various forms for many years.

Hemiandra gardneri is a very attractive plant with greyish foliage and bright red, orange or mauve flowers. It usually has a prostrate habit of growth but can reach about 1 metre in height. The flowers are tubular in shape and open into 2 lips. The upper lip is two-lobbed while the lower lip is three lobbed giving an asymmetrical appearance.

The species is not readily available but has received some limited cultivation. It performs best in dry climates and is unreliable in areas with humid summer conditions. It prefers a sunny, well drained position and will not tolerate severe frosts. The species makes an excellent container plant and has been grown successfully in hanging baskets.

Seed of H.gardneri is not generally available. The species is relatively easy to propagate from cuttings. Grafting onto a related species such as Westringia fruticosa (as has been done with Prostanthera species) may be worth trying as a means of extending the range of cultivation of the species. 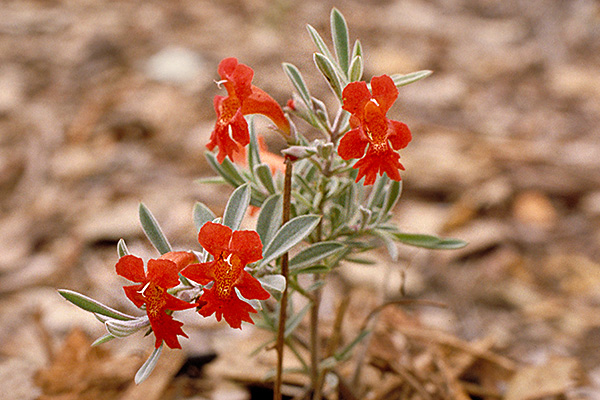