Hibbertia dentata is a fairly non-vigorous climbing or trailing plant, growing to 1 to 2 metres in length. It has elliptic to obovate leaves 3-9cm long by 2-3 cm wide, which are dark green with bronze or purple highlights. The bright yellow flowers, 3 cm across, contrast sharply with the foliage and occur from late winter to late spring. The individual flowers usually last only a couple of days but new flowers are produced over a long period.

Not seen in cultivation as often as it deserves, H.dentata has great horticultural potential; in nature it is found trailing through the forest on the ground or through other low lying plants, and may be grown this way in the garden with minimal risk of smothering other plants (unlike the related Hibbertia scandens). However, it may also be pruned to produce a rather denser groundcover, or grown in a hanging container. One of its best features horticulturally is that it will flower in quite shady positions, with its bright yellow flowers highlighting those areas well. It prefers soils with reasonable drainage (like most other guinea flowers), but does not like to dry out. It will tolerate at least moderate frost.

Hibbertias, generally, are easy to grow from cuttings and H.dentata is no exception. Unlike most guinea flowers it may be readily propagated from seed, though it may be easier to wait for seedlings, which often spontaneously appear in the garden. 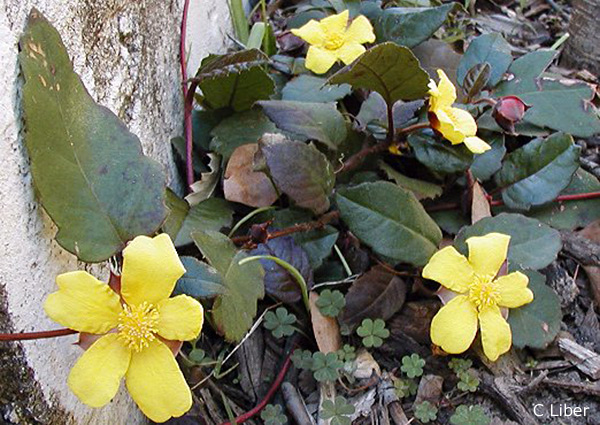