Hibbertia is a genus of around 150 species (though this may increase following botanical revision), most of which occur naturally in Australia. They are generally small to medium shrubs with yellow, buttercup-like flowers.

Hibbertia vestita is a small rounded shrub, with compact growth of around 30 cm high and 40-50 cm wide. It is a fairly sturdy little plant with fairly stiff stems of very small, short, blunt leaves, and both stems and leaves are covered with minute hairs. Its natural habitats vary; it is common in both the Wallum wetlands and the drier high dunes along the east coast. It is plentiful in the understorey of scribbly gum (Eucalyptus racemosa) open forests on coastal sands and the sandstones of montane heaths.

H.vestita is found just about everywhere in the south-east Queensland coastal region, as well as on the sandstone plateau of the Blackdown Tableland west of Rockhampton, so diverse is its range. However, it is also among the many small wildflower plants which we are losing rapidly as development overtakes their natural habitats, especially in the Wallum heaths along the Queensland coastline. There are some variations in its growth, as evidenced by forms collected prior to clearing at certain Sunshine Coast locations. One form appears between H.vestita and H.serpyllifolia, with the centre of the plant growing to 30cm in height, and the rest of the plant steadily forming a matting ground cover. So far, it has been shy at flowering, but the flowers are the typical large ones of both of these species.

H. vestita is often available at specialist native plant nurseries, but should not be confused with H.serpyllifolia, which was being sold as H.vestita only a few years ago. Where H. vestita is a compact little plant, the other species spreads far and wide to make a marvellous ground cover. Both species produce similar large bright yellow flowers, which can cause confusion. In a garden, several plants of Hibbertia vestita should be planted to make a decent show, preferably where they receive almost full sun, for better flowering. It appears to be a fairly long-lived species, adaptable to most situations, but does appreciate that extra bit of water during dry times. Pruning doesn’t seem to be necessary, but would probably make for a bushier plant (especially if the tip prunings are used to grow more of this lovely Hibbertia for the garden, and to pass on to others!). It will brighten any garden with its large clear yellow flowers up to the size of a 50 cent piece in spring.

Hibbertias, generally, are easy to grow from cuttings and H. vestita is no exception. Propagation from seed is unreliable. 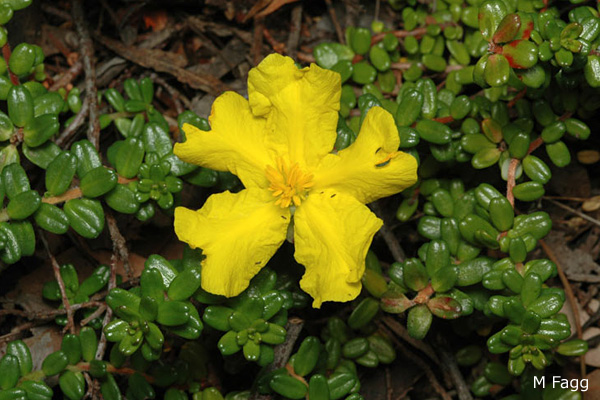