Kunzea parvifolia is usually a erect shrub to about 1 metre in height, however, a prostrate form has also been in cultivation for many years. The leaves are small (usually less than 5 mm long). The small pink to mauve flowers are clustered into globular-shaped heads at the ends of the branches and are very profuse and conspicuous. The flowers which occur in spring are followed by small 1-celled fruits which release numerous small seeds when ripe.

This species has been in cultivation for many years and is generally a reliable plant for temperate climates and in all but waterlogged soils. It withstands at least moderate frost. Because of the wide natural distribution of the species, best results are obtained if forms native to a similar climate to the grower’s location are selected. For example, the prostrate form is difficult to maintain in areas with humid summers.

Propagation of K.parvifolia is easy from both seed and cuttings. If seed is being collected, the plants need to be kept under observation or the seed will be lost. 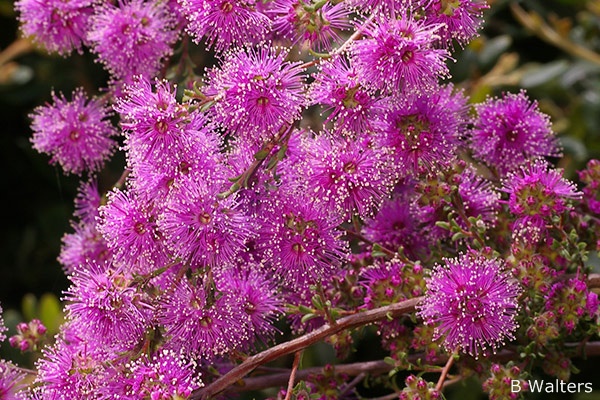