Labichea is a Australian endemic genus of 14 species, most of which occur in Western Australia but several can be found in Queensland and the Northern Territory. It is closely related to the genus Petalostylis. Labichea and related genera, including Senna and Cassia, may still be seen classified within the separate family Caesalpiniaceae but it is now more common for these plants to be classified as a sub-family within the widespread family Fabaceae.

Labichea lanceolata is a small to medium, woody shrub to 2 m tall. The leaves are pinnate, although may ber unifoliate or trifoliate. The main leaflet ranges from 25 to 120 mm long by 10-20 mm wide; the lateral leaflets are much smaller. Bright yellow, 4-petalled flowers with a red centre occur in late winter to spring and are quite large (up to 30 mm in diameter).

Two subspecies are recognised. Var. lanceolata differs from the var. brevifolia in having up to 6 leaflets.

Labichea, generally, is not cultivated widely but this species would be suited to most drier areas as long as it is given full sun and good drainage. It has not been tested to a great extend in more humid areas.

Propagation is usually carried out from seed which germinates readily after treatment with boiling water. Cuttings of hardened, current seasons growth should also be successful. 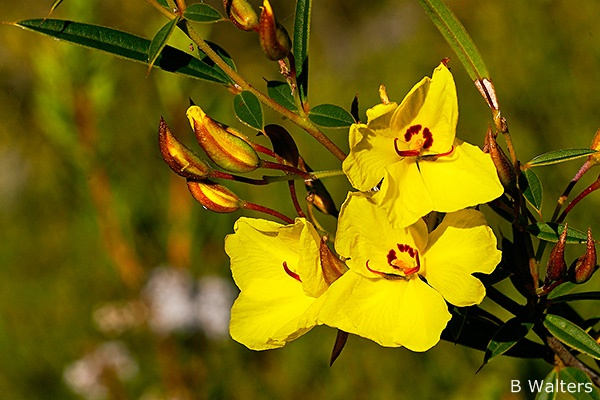