Lechenaultia is a genus of about 30 species of small, shrubby or herbaceous plants. Most are found in Western Australia. The best known is L.biloba, the blue lechenaultia which is commonly cultivated in many areas of Australia.

Lechenaultia macrantha is usually 150 mm or less in height, spreading to about 1 metre in diameter. The branches are twiggy with linear, narrow leaves to around 40 mm long.

The flowers of are five-petalled and at about 30-35 mm diameter and occur most prominently around the circumference of the plant – anyone seeing the plant in flower is in no doubt as to the origin of the common name. Generally the flower colour is deep pink to red with yellow or white in the centre. Flowering occurs in late winter and spring.

As a native of south Western Australia, L.macrantha prefers climates with dry summers. It is not well known in cultivation as it is difficult to maintain for more than one or two seasons, even in areas of suitable climate. It could be worth trying in a well drained container.

Propagation of L.macrantha is difficult from seed but cuttings strike very easily. This means that the keen plant propagator can ensure that replacement plants are always available when older ones die. 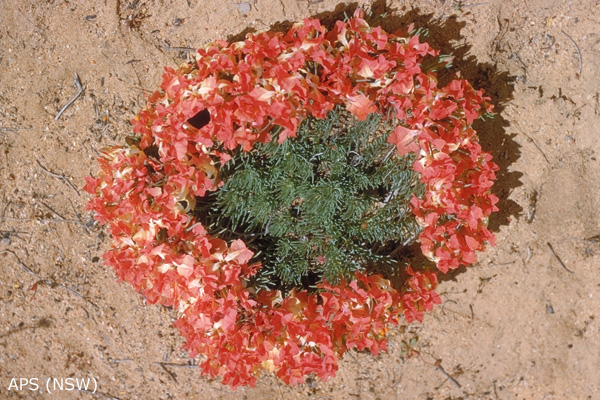