Like most of Australia’s members of the Ericaceae, Lissanthe belongs to the subfamily Epacridoideae, which was formerly classified as a separate family, the Epacridaceae. Lissanthe is a small genus of about six species all endemic to eastern Australia. They are small, wiry shrubs usually found in heaths, woodlands or forests. Lissanthe is closely related to Leucopogon and from time to time there has been some debate as to the appropriate genus into which some species should be placed.

Lissanthe strigosa is the most widely distributed member of the genus and it occurs in a range of habitats. It is a small, stiff shrub to about a metre in height but often smaller. The small, linear to lance-shaped leaves are about 10-15 mm long or less and taper to a rigid point. The white to pink flowers are tubular and about 25 mm long, occurring in clusters in the leaf axils towards the ends of the branches. Flowers are generally seen in winter and spring and are followed by small, edible, fleshy fruits (drupes) about 3-4 mm in diameter.

This is a very attractive shrub and would make a useful addition to the garden. However, due to difficulties in propagation, it is rarely seen in cultivation although it was grown in England in the early 1800s indicating that cultivation is certainly possible. It is likely to require a well drained position in sun or semi shade and should be able to tolerate extended dry conditions once established. Like most members of the Australian heaths, L.strigosa should be an excellent species for growing in a container.

Propagation from both seed and cuttings is very difficult. It is reported that seed needs to be sown when fresh and the best chance of striking cuttings would be by using firm, current season’s growth. Use of a hormone, root promoting chemical would probably be advisable. 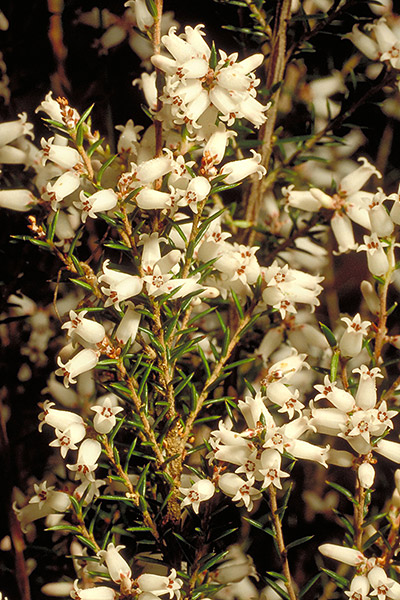