Marianthus is a small genus of about 15 species which as undergone a number of taxonomic re-classifications over the years. Until 2004 it had been subsumed into Billardiera but further studies by L. W. Cayzer and M. D. Crisp indicated that the genus should be restored (see footnote). Members of the genus are mainly light climbers or small shrubs. All occur only in Australia with the majority being found in Western Australia.

M.erubescens (formerly Billardiera erubescens) is a colourful twining plant which tends to scramble among shrubs and grasses growing nearby. It is not especially vigorous and never dominates other plants. The leaves are glossy green and lance-shaped to about 30-40 mm long. The bright red flowers are tubular and very conspicuous (about 20-30 mm long). Peak flowering period is spring but flowers may also occur at other times.

This is one of the most popular members of the genus for cultivation as it is hardy in a variety of soils and climates, is very colourful and is not a climber that will become a nuisance. It prefers a well drained soil in a sunny position. Once established it will tolerate extended dry conditions. Despite its western origin, it grows well in humid areas of the eastern states.

Propagation from seed is unreliable and can occur after many months but may not occur at all. The species can be propagated from cuttings using firm, current season’s growth but they can be slow to form roots. 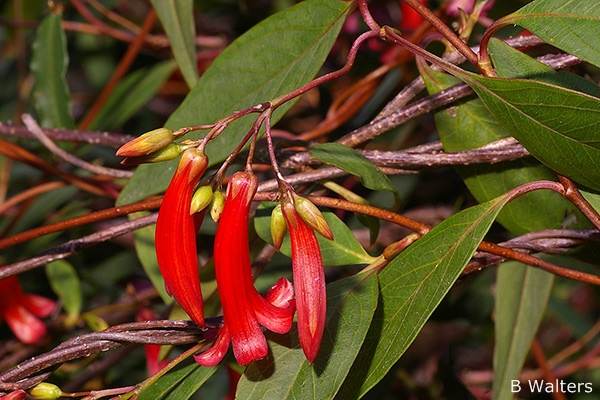