Melaleuca diosmatifolia is relatively common in cultivation where it is often still referred to under its previous name of M.erubescens. It is generally a small shrub less than 1.5 metres high but it may occasionally reach 3 metres. It has narrow, linear leaves 7 to 15mm long, ending in a small point (a mucro). The flowers are usually seen in spring and early summer and occur in bottlebrush-type spikes up to 30 mm long and about 15 to 20 mm in diameter on short branches.The flower colour is usually pale pink to deep mauve, fading to cream. The flowers are followed by small, globular fruits containing many small seeds and which remain on the plant indefinitely.

Melaleuca diosmatifolia a hardy species which can be grown in a wide range of climates. It prefers moist soils and can be grown in soils which are less than perfectly drained. It prefers a sunny, open position but will also grown in light shade. It is tolerant of at least moderate frost. The species responds to annual fertilising after flowering and to an annual light pruning to encourage a bushy shape. 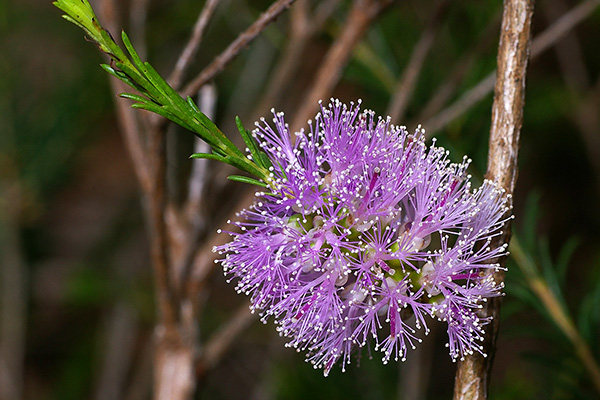