Melaleuca suberosa is a small shrub to about 1 metre high but often less in exposed areas. The stems have a corky texture, which gives rise to both the common name and the species epithet. The small leaves are linear in shape to about 6-7 mm long. Flowers occur in clusters along the older stems, often forming extended “spikes” of flowers. They are deep mauve to purple and are seen in late winter and spring. The flowers are followed by globular seed capsules.

Many species that are native to the south-west of Australia can be difficult to maintain for long periods in more humid areas of the east coast. M.suberosa is reasonably hardy in southern areas of the east coast and west of the Great Dividing Range. However, it becomes more difficult to establish further north and is probably not suited to sub-tropical and tropical climates. It is an interesting species because of the corky bark and is very attractive when in flower. It requires a well drained, sunny position. The species responds to pruning but this should be avoided as it will reduce flowering for a season or two. It is tolerant of light to moderate frost. 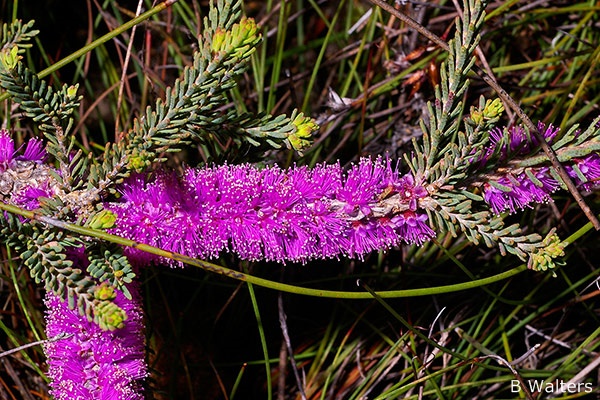