Melia is a small genus of 2 species. Melia azedarach is the best known species with a wide natural distribution extending from China, India and Japan to Indonesia, Australia and the Pacific Islands. It is also a widely distributed weed species in many parts of the world. The Australian plants are classified as Melia azedarach var. australasica, although some cultivated plants may be non-native forms.

White cedar is a small to medium, deciduous tree from 6 to 35 metres in height. The bark is brown with narrow furrows which give a striped appearance. The leaves are bipinnate with oval to elliptical-shaped leaflets from 20 to 70 mm long and are dark green in colour. The leaves are usually shed in winter which makes this species one of the few Australian native trees that are winter-deciduous. The pink to lilac flowers are star-shaped, about 18 mm in diameter and have a chocolate scent. They occur in conspicuous clusters from the leaf axils, mainly during spring but flowering maty extend into summer. The flowers are followed by yellow clusters of fruit which are poisonous if eaten by humans and animals although many birds seem partial to them and are not affected.

This is widely planted and attractive shade tree which is hardy in a wide range of soils and climates. It can sometimes be attacked by hairy caterpillars which cause severe defoliation (larvae of the White Cedar Moth, Leptocneria reducta). It is hardy to at least moderate frosts.

Propagation can be carried out from seed which germinates well, without treatment. Cuttings of firm, current seasons growth should also be successful. 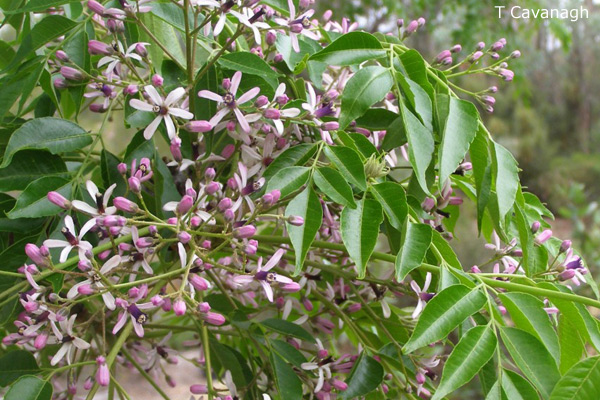