Mirbelia is a genus of about 25 species all of which occur naturally only in Australia. Most species are found in the south-west of Western Australia.

Mirbelia rubiifolia is probably the best known member of the genus. It is a straggly shrub about 50 cm high with wiry stems spreading to about 75 cm.

The leaves of Mirbelia rubiifolia occur in whorls of 3 and are narrowly oval shaped to broadly linear, 10-25 mm long by 30 mm wide with a sharp point. There are conspicuous reticulate veins on the upper surface. The pink to purple flowers have the typical “pea” shape consisting of 4 petals; the “standard”, the “keel” and two “wings”, as shown in the diagram. They occur in the leaf axils in late spring and summer and are about 70 mm long. The flowers are followed by small, ovoid seed pods about 5 mm long.

Mirbelia rubiifolia is not often cultivated but is sometimes grown by Australian plant enthusiasts. It is regarded as a reasonably hardy species for moist, semi-shaded sites but can be short-lived. It tolerates at least moderate frost and requires good drainage. 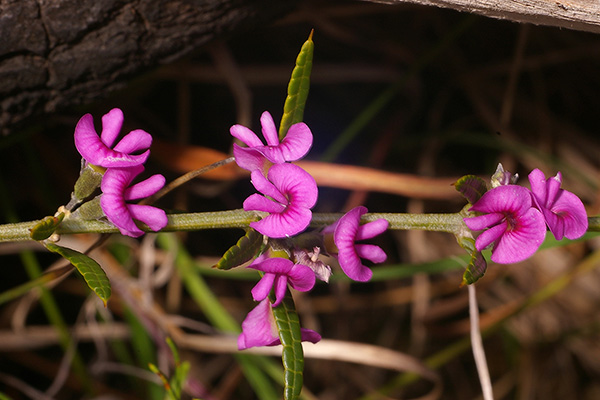