The genus Olearia is found in Australia, New Zealand and New Guinea and has about 130 species native to Australia. They are generally small to medium shrubs commonly known as “daisy bushes”.

Olearia stellulata is usually a small to medium shrub up to 2-3 metres high by a similar width. The leaves are typically oblong to elliptical in shape, 90-150 mm long and may have entire or toothed margins. The under surface of the leaves is densely covered with stellate hairs. The daisy flower heads are usually white but pink, purple or blue forms are known. Flowers appear in spring and summer and the flower heads are about 15-25 mm in diameter.

With a few exceptions, olearias are not commonly seen in cultivation. O.stellulata is not widely cultivated other than by enthusiasts. It is a hardy shrub for well drained, moist soils in full sun or semi shade but, like many species in the genus, it can become leggy and sparsely foliaged with age. Annual pruning after flowering is recommended to restore vigour. The species is tolerant of moderate frost but may be damaged by heavy frost. It is not especially tolerant of extended dry conditions. A cultivar known as ‘Olwyn Barnett’ has been selected for its pink/purple flowers

Propagation of O.stellulata may be carried out from seed but germination may be unreliable. Propagation from cuttings of current season’s growth is usually not difficult and this is the only method that should be used for the cultivar ‘Olwyn Barnett’. 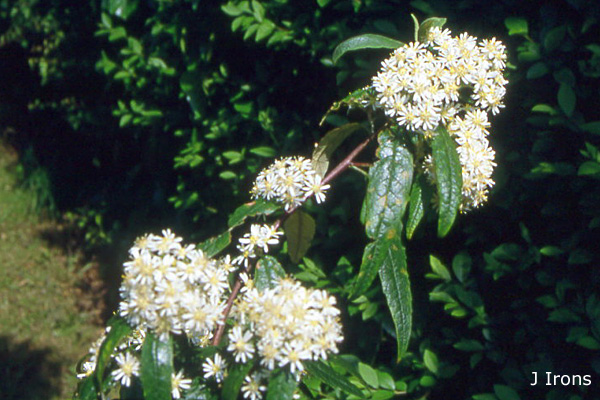