Persoonias are known generally as “geebungs”. There are 60-70 species and, with the exception of one species in New Zealand, all occur only in Australia. They can be found in all States but are absent from semi arid and arid zones.

Persoonia linearis is a common species found on both sandy and some clay soils in eastern Australia. It is a large shrub generally reaching 2 to 5 metres in height by a similar width, with attractive blackish fine papery bark, which is reddish underneath. The soft green foliage is comprised of leaves that are are long and narrow, up to 90 mm long by 1-6mm wide. The small yellow flowers are borne in the leaf axils at the ends of the branches, typical of many geebungs. They occur over a long period, from mid spring to late autumn. The flowers are followed by fleshy, green fruits which hang in grape-like clusters.

Horticulturally this species is overshadowed somewhat by its better known relative P.pinifolia and it is seldom seen in the home garden. It is, however, occasionally seen in street or amentiy planting such as in Bicentennial Park in Homebush Bay in Sydney. P.linearis is a very attractive and desirable garden plant. Its bark and foliage are attractive at all times of the year. The flowers, although small, are well displayed. The species is hardy in most well drained soils and prefers a sunny position or one with partial shade. It will tolerate reasonably heavy frosts. P.linearis may hybridize in nature with the related Persoonia levis (broad-leaved geebung), the resultant plant, known as Persoonia x ‘lucida’ is sometimes cultivated.

Persoonias, generally, have proven to be difficult to propagate from both seed and cuttings and P.linearis is no exception. Some success has been reported with cuttings by using firm regrowth from pruned branches. Strike rates may vary greatly from year to year. 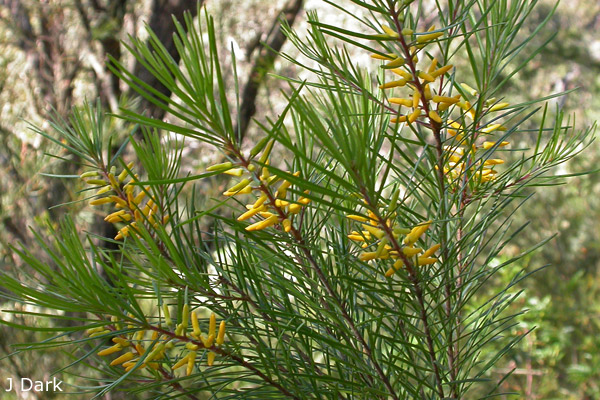