Petrophile biternata is a rigid, prickly shrub from 1 to 2 metres high without a lignotuber. The stiff leaves are from 25 to 75 mm long and flattened in cross-section. They are divided into lobes several times and the tips end in a sharp (pungent) point. The small flowers are cream to yellow and occur in small clusters at the ends of the branchlets in late winter through spring. The fruit is an small, oval shaped cone containing numerous seeds protected by woody bracts. The fruits remain on the plant for an indefinite period and only release the seeds after a fire or the death of the plant.

P.biternata is not cultivated to any great extent. It is an interesting species with attractive foliage and would be an attractive addition to a native garden. Like many western species, it may be difficult to maintain for long periods in more humid and wet areas of eastern Australia. It is likely to perform best in areas with dry summers and with well drained soils. A sunny position will produce the best flowering but some shade should be tolerated. It should withstand light to moderate frosts.

Ease of propagation is not known but seed should germinate relatively easily without pretreatment. Cuttings of firm, current season’s growth may also be successful. 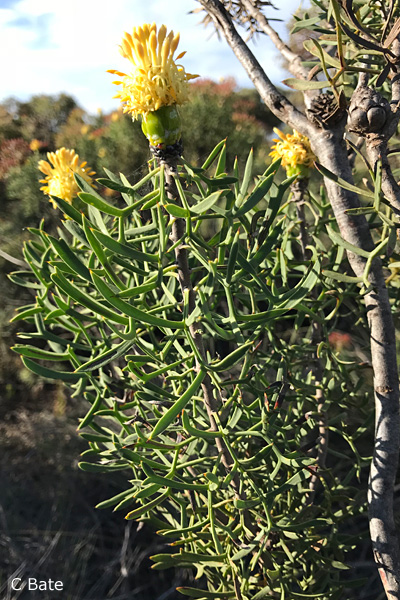