Philotheca is a genus of about 45 species, all of which occur only in Australia. The genus has been recently increased in number by the transfer of about 39 species from the genus Eriostemon. Transferred species include Philotheca nodiflora which was previously known as Eriostemon nodiflorus. Philotheca is closely related to the well-known Boronia, the most obvious distinction being the presence of 4 petals in Boronia and 5 in Philotheca. The leaves are also opposite in Boronia and alternate in Philotheca.

Philotheca nodiflora is a small, upright shrub usually less than one metre high. The grey-green leaves are linear, about 10-15 mm long and have a strong aroma when crushed due to the presence of volatile oils. The pale blue, pink or mauve flowers are seen from late winter through to late spring and are about 10-15 mm in diameter. There are four recognised subspecies which differ mainly in growth habit.

P.nodiflora is relatively well known in cultivation and is best suited to districts with a dry summer climate. The plant can be grown in more humid areas but is often short lived there. It prefers well drained soils in a sunny or semi shaded position. The plant can be pruned lightly after flowering to help maintain a bushy shape. It is also a useful container plant.

In common with most members of the Rutaceae, propagation of P.nodiflora from seed is difficult. Cuttings usually strike readily from current season’s growth. 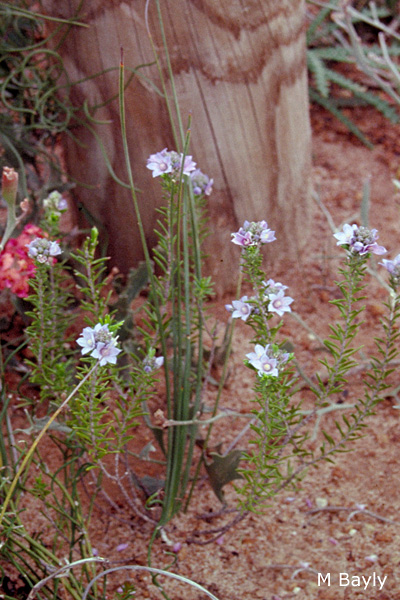