Philotheca is a genus of about 45 species, all of which occur only in Australia. The genus has been recently increased in number by the transfer of about 39 species from the genus Eriostemon. Transferred species include Philotheca obovalis which was previously known as Eriostemon obovalis. Philotheca is closely related to the well-known Boronia, the most obvious distinction being the presence of 4 petals in Boronia and 5 in Philotheca. The leaves are also opposite in Boronia and alternate in Philotheca.

Philotheca obovalis is a small shrub usually less than one metre in height. The leaves are elliptical to spathulate (spoon shaped) in shape, about 10 mm long by 10 mm wide and with small ‘warty’ oil glands on the undersurface. The waxy, white (occasionally tinged pink) flowers are seen from late winter through to late spring and are about 12 mm in diameter. They occur in the leaf axils.

This species is not often cultivated and can be unreliable as a garden plant possibly due to a requirement for higher altitude conditions. It requires a well drained moist soil, preferably in semi shade. It should not be allowed to dry out.

In common with most members of the Rutaceae, propagation of P.obovalis from seed is difficult. Propagation from cuttings can be successful using hardened, current season’s growth but cuttings can be slow to strike with a success rate of less than 100%. 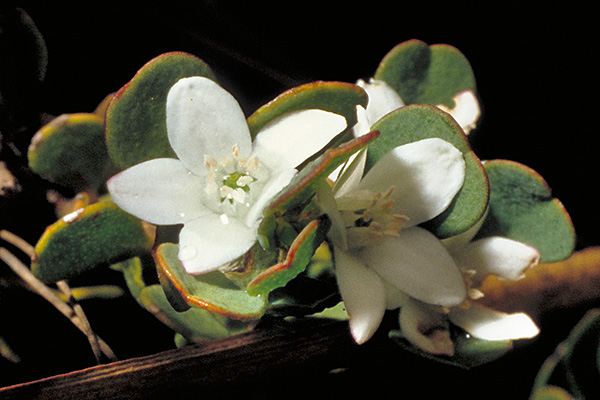