Platylobium is a small genus of 9 species which is closely related to Bossiaea. Revision of the genus in 2011 has resulted in several forms of Platylobium formosum being separated out into new species (see footnote).

Platylobium formosum is a straggly, understory shrub from about 1 to 2 metres high with wiry stems. The leaves vary from narrowly ovate to heart-shaped and are 30-50 mm long by 15-40 mm wide. There are conspicuous reticulate veins on the upper surface.

The bright yellow flowers have the typical “pea” shape consisting of 4 petals; the “standard”, the “keel” and two “wings”, as shown in the diagram. They occur in late spring and summer, solitary or two together in the leaf axils. They have a red centre and are relatively large – 8-15 mm long. The flowers are followed by flat seed pods about 20-40 mm long.

P.formosum is not often cultivated but is grown by Australian plant enthusiasts. It is regarded as a hardy species for moist, shady sites, similar to those of its natural habitat. It requires good drainage.

Propagation is relatively easy from seed following pre-treatment with boiling water (similar to other members of the pea family). Cuttings may also be successful from firm, current season’s growth. 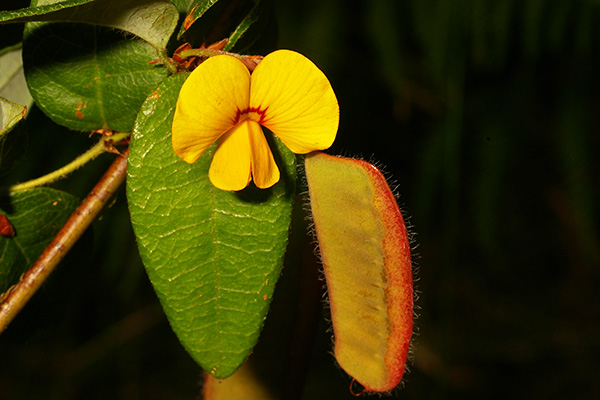