The genus Podolobium is a small genus of 6 species, all of which were previously included in Oxylobium. The genus occurs only within Australia and all are small to medium shrubs.

Despite the specific name, Podolobium scandens is not a climbing plant. Rather, it is a prostrate, scrambling species which forms a very attractive and not especially vigourous groundcover. It rarely spreads more than about 1 metre diameter. The leaves are 20-50 mm long and may be oval or elliptical in shape.

The flowers of P.scandens have the typical “pea” shape consisting of 4 petals; the “standard”, the “keel” and two “wings”, as shown in the diagram. The flowers are about 12 mm in diameter and are formed in small clusters at the ends of the branches or in the upper leaf axils. They are yellow or pale orange and are seen mainly in spring but extending into summer. The flowers are followed by small, swollen seed pods.

Although not often cultivated, this is an excellent small ground cover for a position in full sun or light shade. It will grow in heavy soils provided they are not permanently wet and it tolerates at least moderate frost. 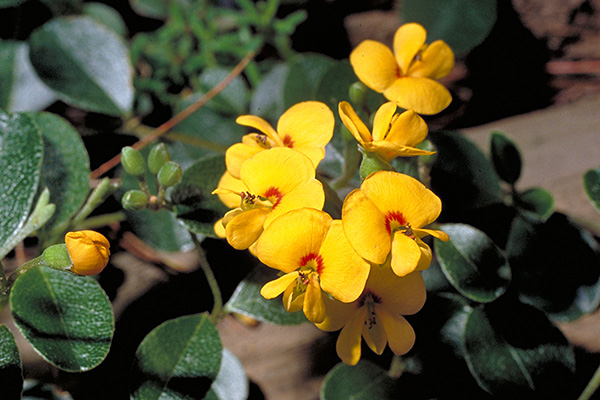