Pomaderris is a genus of about 70 species almost totally confined to Australia but eight species are found in New Zealand. They are small to large shrubs (occasionally trees) usually with short hairs on young stems and leaves and clusters of small cream to yellow flowers. In Australia the genus is found in all states with the greatest concentration being in south-eastern New South Wales and eastern Victoria.

Pomaderris andromedifolia is a small to medium shrub 1-2 metres high with a bushy habit. The young stems have a rusty appearance due to short hairs on the surface. Leaves are variable from elliptical to oblong and are 10-50 mm long by about 3-5 mm wide with white or rusty hairs on the underside. Flowers occur in clusters at the ends of the branches and are cream to yellow. Flowering occurs in spring.

Pomaderris, generally, are nor widely cultivated although they have much to offer the native garden. P.andromedifolia is no exception to this, which is a pity as its moderate size, attractive foliage and colourful flowers would make it an asset in any garden. Availability is one problem due mainly to difficulties in propagation. In the garden the plant requires moist, well drained soils in a sunny or lightly shaded position.

Propagation can be carried out from seed which germinates well following treatment with boiling water (similar to the method used for Acacia and the pea-flowered plants – see general notes on propagation from seed). Seed is shed from the plant when ripe and is difficult to collect. Cuttings of hardened, current seasons growth can be successful but they are usually very slow to strike and the success rate is usually well below 100%. 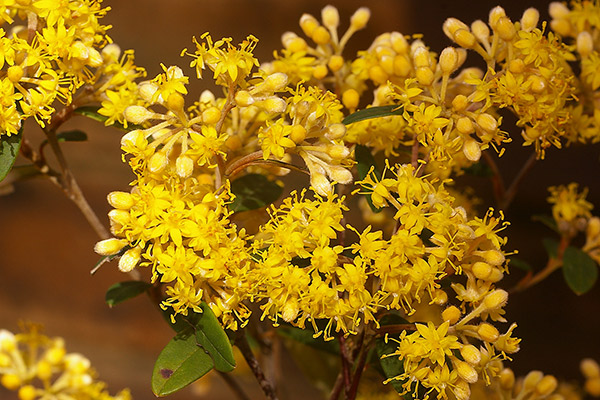