Regelia is a small genus of 6 species, 5 of which occur naturally only in south Western Australia and one species in Kakadu National Park in the Northern Territory. All species occur in well-drained sites – on sandplain, woodland or rocky hillsides or escarpments. The genus is closely related to the more familiar Melaleuca, both genera having stamens which are joined into clusters. The difference between the genera is in the arrangement of the anthers (the pollen bearing structures of the flowers). In Regelia these are attached to the stamens at their bases (basifixed) whereas in Melaleuca the anthers are attached along their sides (versatile). Other genera closely related to Regelia include Beaufortia, Calothamnus and Eremaea.

Regelia velutina is reasonably well known in cultivation. It is a large shrub to about 3 metres with attractive, greyish green, velvety leaves to about 13mm long. The large clusters of brilliant red/orange flowers (occasionally yellow) open in spring and are well displayed towards the ends of the branches. Following flowering, seeds develop in woody capsules similar to those formed with Melaleuca species. The seeds are retained within the capsules indefinitely.

R.velutina is a very striking plant in both foliage and flower but it is not common in cultivation, particularly in areas of summer humidity and rainfall. Under these conditions all species can be short lived even in well drained soils. In drier climates the plants are desirable garden subjects, the colourful flower clusters being attractive to birds. The species should be grown in well drained conditions in full sun or dappled shade and it is tolerant of at least moderate frost.

Propagation is easy from seed but cuttings can be difficult to strike, particularly in mist propagation systems as the hairy foliage retains moisture and can rot. 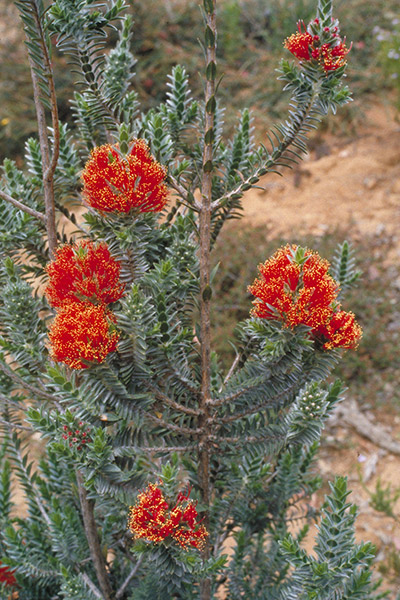