Ricinocarpos is a genus of about 15 species, occurring in all States with one also found in New Caledonia. They are small to medium shrubs with conspicuous white or pink flowers which are unisexual.

Ricinocarpos pinifolius is the most widespread member of the genus and is a conspicuous member of coastal heath and woodland communities when it is in flower during spring. It is usually found on sand dunes or on sandstone-derived soils. It is a small to medium shrub, rarely exceeding 1.5 metres in height with narrow, linear leaves about 30-40 mm long. The pure white male and female flowers are about 25 mm diameter. The flowers are similar in shape but the male flowers can be distinguished by the mass of yellow stamens. There is usually one female flowers to three to slx males. The flowers are followed by the fruit, which is a rough, globular capsule which splits when ripe to release 5 shiny seeds.

Wedding bush makes an attractive shrub for the garden, particularly for coastal areas on sandy soils. However, it is rarely seen in cultivation because of difficulties in propagation. Germination of seed is virtually impossible with present knowledge and cuttings can be slow and difficult to strike. There is some evidence that some clones strike from cuttings easier than others. 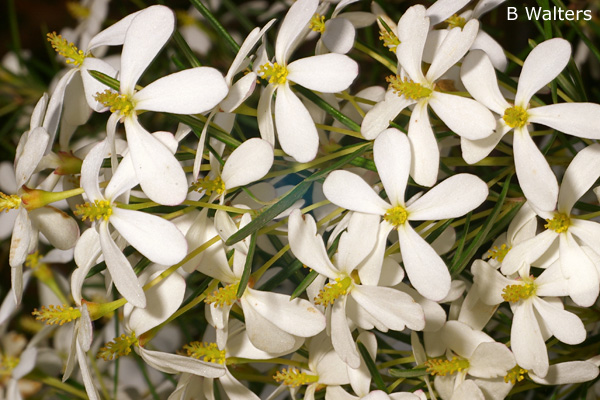